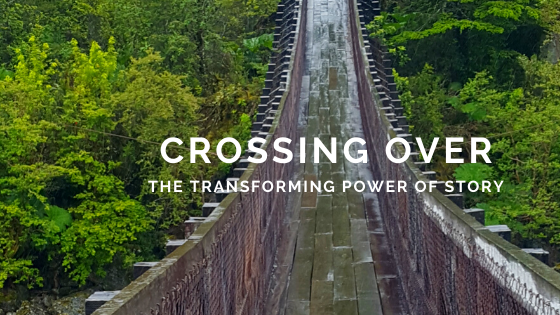 When, I ask myself, did Inspirational start to mean cozy, clean, and…colorless? No cursing, no killing…but no preaching, praying, or pew-parking, either. And definitely no controversy and no fighting and dying for the truth, if there even is a truth. In the publishing world, they’re called crossover books. Somehow I missed crossing over the bridge.

Oh, I get the motive behind the move. Some writers have a genuine—even applaudable—desire to reach out to audiences other than the church crowd. Others aim for the greener pastures of secular accolades, shaking the dust of “mediocre, moralistic” storytelling from their literary shoes as they hustle.

I wonder if they hit the target either way. How can you share the gospel without, um, mentioning Jesus? Three-points-and-a-poem sermons might weigh too much, but crossing the bridge of evangelism minus the evangel (good news) accomplishes less than a warrior who’s left his sword behind.

Someone once said, “Preach the gospel. If necessary, use words.” So true, but guess what? Most of the time, you get to the point where, yeah, it becomes necessary to use words.

On the other hand, an old missionary friend frequently compared good language skills to the wrapping on a gift. Presentation is, if not everything, extremely important. A well-spoken speech or a well-written story—both make or break the message.

What makes a book good—and what makes a book Christian? Two critical questions. If a book is both good and Christian, then it’s truly inspirational. And if it’s not both of those things, does it deserve the label?

Shall We Gather at the River?

Can we cross over? I certainly think some from among the Body of Christ should “go into all the world” (Mk. 16:15) In the Song of Solomon, the Bride is compared to “an army with banners” (7:10). Wow, can’t you picture this host crossing the bridge, carrying their trumpets, torches, and streaming colors?

The world’s need more than speaks for itself. The prophet Jeremiah sobbed in 586 BC, “Who can heal you? Your prophets have seen for you false and foolish visions; and they have not exposed your iniquity so as to restore you from captivity” (Lam. 2:13-14).

In her book Walking on Water, Madeleine L’Engle laments that so many have learned “the dirty devices of this world.” The corrupted passions she refers to are not only “iniquity” and immorality and the depravity of the month, but the tedious conformity which blunts our imagination and our perception of God and His kingdom.

The world’s joy is so ambivalent. Have our creative pens and palettes become so dull that we can’t conceive of romance without sex? Or ecstasy without chemicals? Our adventures decay into cynicism. Our valor in the face of danger degenerates into violence for its own sake. The real enemy vanishes.

But doesn’t retreat, apparently. Because these days, it seems, everybody’s spiritual odyssey leads them to Buddha. But not to Jesus. The secular press would delight to hear how I became a druid, dinosaur tamer, or transcendental-meditation devotee. But not why I follow Christ.

Superb writing craft abounds. If you can overlook the thrillers and erotica dashed off to market or to compliance with this year’s politically correct agenda. Or the literary mumbo-jumbo whose veneer of sophistication conceals meaning so obscure that the ordinary person cannot grasp it.

This is style without substance, “clouds without water” (Jude 12). The takeaway? An overcast soul. But “they have rejected the word of the Lord, and what kind of wisdom do they have?” (Jer. 8:9).

These “dirty devices” deaden creativity, muffle the music of the universe, stifle our sense of connection with what’s beyond ourselves. Many writers turn into mere technicians, precise and skilled, but terrified of the simplest truths outside the status quo. They write to deny the deeper dread that perhaps there is no god to trust, no love that will redeem and heal.

Why do television and films so often portray religious people as frauds and freaks, abusers, rapists, and ranting fanatics, unkind gossips? You know, the militia cults tucked away in the backwoods of Appalachia… Why, when Christians should be the healthiest people you know?

As well as the world’s most creative people. In our church here, we urge musicians not to “screech for Jesus.” And I’d add for writers: Don’t scribble for Jesus either.

“The Christian is one whose imagination should fly beyond the stars.” –Francis A. Schaeffer

What if the best books were written by Christians? Or the inverse, Christian books were the best? Not necessarily the most appreciated and praised, but quite sincerely the best?

Novels like that would be true novelties. Too ambitious?

A Bridge Too Far

The Allied disaster of Operation Market Garden, portrayed in the WWII movie A Bridge Too Far, shows an overreaching tactic, based on misjudgment. Crossing over at the wrong place, the wrong time.

Sometimes I question our crossover battle strategy too. When you’re rolling toward the frontlines of a war zone, you don’t go unprepared to confront that enemy and rescue the victims. You don’t leave without your backpack filled with grace and spiritual power, a source of light and food.

You don’t venture too far into the wilderness of enemy territory either. And unless you’re heading in as an undercover agent, you don’t dress in disguise and keep your identity secret.

In our desire to make it big in the wide world of publishing—perhaps in an attempt to shine in the popular market—do we shed our true selves and imitate the pack surrounding us?

We’re tempted to pick up a couple of bad habits:

Because the medium of wordcraft entails such a huge responsibility, I work (at least figuratively) with trembling fingers. Christian writers need to apply themselves to continual improvement, not necessarily to earn the applause of publishing pundits but to present the best art possible.

Our books and stories should offer the most timely, accurate, spot-on work out there. The most evocative and exquisite. The most discerning and delightful.

“All that is not eternal is eternally out of date.” –C.S. Lewis, The Four Loves

The excellence that Philippians 4 calls us to is more than moral excellence, although that’s certainly part of it. The world may not yet refuse writers in the Christian market a deserved place on the New York Times Bestsellers List, but we’re sure not going to snag a Nobel Prize with anything redolent of Jesus.

But that shouldn’t be because the writing stinks.

And while I’m on the subject of subject matter, why are we so predictable with our plots? Oh, yeah, another one about cowboys in Montana or barns and buggies in Amish country… And the spiritual content consists of an unbelievable prayer in trouble.

Please, I beg, make it believable, even if it’s that “willing suspension of disbelief” in a fantasy. And make it unpredictable. I hear vampires and zombies are now hanging out in Lancaster County. Now that’s original…

I name no names—I’m not remotely qualified to critique another writer’s premise, except as a Christian reader. I probably shouldn’t target genre either, since we live in a different-strokes-for-different-folks universe and people are entitled to their reading tastes, after all.

But it’s a wounded world out there. A world in agony, yet a world in defiance. In crossing over, many approach the needs either by denying the pain or falling into the pit themselves.

In all life’s somber seriousness, we need rest and relaxation, and yes, the occasional escape, offered by humor and fun, light-hearted whodunnits and sweet romance.

On the other hand, when our cursory handling of important themes trivializes real people’s hurts, we should re-evaluate the purpose of reading and writing—and crossing over. As the prophet Jeremiah said of the leaders of Israel, “They heal the brokenness of the…people superficially, saying, ‘Peace, peace,’ but there is no peace” (8:11).

Our Christian worldview should deal with real problems. Through creativity, not timidity. With compassion, not fear. We don’t wring our hands and whimper about the lack of answers.

Yes, “for the brokenness of the daughter of my people I am broken” (Jer. 8:21). But “joy to the world, the Lord has come.” Our solutions should reflect the light of the glorious good news that can change everything, give glimpses of the magnificent world on the other side of time and space.

We may as well stay on our side of the river if the only balm we can offer is a milk-toast religion consisting of no blood and f-bombs. Both Sunday school sweetness and raw realism amount to what Madeleine L’Engle terms “plastic sham.” It’s crossing over to serve lukewarm water, which as you remember, Jesus spit out.

You can take it I’m not convinced of the effectiveness of the secret-agent style of spiritual warfare. I really believe more in highly-trained, highly-committed foot soldiers who carry their weapons openly along with a discernible flag and a transparent light.

Next week we’ll try to find our way to the Bridge over troubled waters.