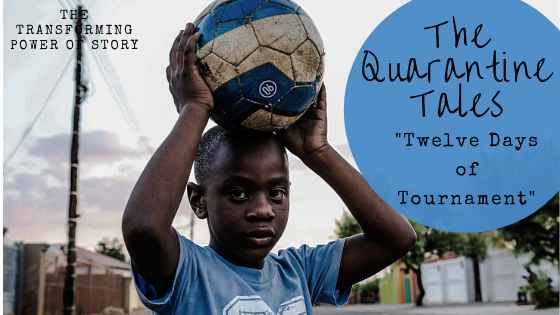 If Michael Jordan and Pelé (if you have to ask, the joke’s for you) were walking down the street together anywhere except North America, 99% of the people would ask, “Who’s that guy with Pelé?” That’s how soccer rules the world. Because everybody from Manchester to Moscow, Montevideo to Melbourne, knows soccer.

Everybody may not play it. They may not all love it. Definitely not everyone eats, sleeps, and dreams it. But it dominates life around the globe in dozens of perceptible and imperceptible ways.

Soccer is the world’s most popular sport. Now, I realize that most of my women readers didn’t grow up playing after-school soccer. But bear with me a few minutes and consider today’s post a cultural education.

“Soccer is perfectly suited for a country of the hamster-treadmill pace, the remote-control zap and the national attention deficit—two 45-minute halves, the clock never stops, no commercial interruptions, the final whistle blows in less than two hours. It is a fluid game of systemized chaos…” –Jere Longman, American sportswriter

Though it started out as “the English game,” soccer (or fútbol or football, as it’s known in much of the world) quickly traveled via English sailors to the coasts of South America—Brazil, Argentina, Chile. The first Chilean soccer club was founded in the port city of Valparaiso during the 1880’s.

By 1962, when Chile hosted the FIFA World Cup and took 3rd place, soccer had come into its heyday as the sport that ruled the world. In Chile that year, the game dug the nation from the rubble of the 1960 earthquake and gave birth to an entire generation of boys named Sergio and Leonel.

What’s soccer’s lasting attraction all about? While my husband gets a “kick” out of cheering the underdogs, for me it’s about winning the impossibly challenging match.

My personal love affair with soccer began in 1990 during the Italy World Cup’s opening game, when humble Cameroon knocked the socks off defending champion Argentina. (History repeated itself in 2014 between Germany and Brazil. That day, I was shopping in downtown Santiago with my daughter, a German translation student at the time, and we watched—slack-jawed—along with everyone else in the mall.)

“The more difficult the victory, the greater the happiness in winning.” –Pelé, Brazilian footballer

Then to our surprise, Chile’s most popular team, the iconic Colo-Colo, triumphed in South America’s 1991 Copa Libertadores. Later we moved to within a block of their stadium and could hear the games on the loudspeakers! (Believe me, that only slightly mollified my indignation over their graffiti wars on our walls.)

During the ’90’s in Linares, we watched Real Madrid play every Saturday or Sunday afternoon—sponsored by MegaVisión—while I mended socks and the neighborhood kids thronged at the windows and doors. That decade we learned that soccer fervor would win us more friends and hook more hearts than we could imagine. And though our favorite player wasn’t brilliant, he still carried his team to Spain’s national championship and snagged the Golden Boot—the pichichi, the high scorer.

Soccer rules the world from a rooftop dish now. The top clubs compete almost weekly in international tournaments such as the European Champions League and the Liberators’ Cup. But in those old days, our living room gained goodwill as the neighborhood sports café.

It sets the world in a spin.

The day we moved to Coquimbo three years ago, all our crew of helpers hustled. I mean, they arrived early (a miracle). They unloaded the truck and raced around the house as if running a marathon. We were amazed…until we realized that Chile was playing in a World Cup elimination game that afternoon. Of course, we shoveled down our lunch along with everyone else, abandoned the unpacked boxes, and hurried to a friend’s house to watch.

And that was only a preparatory play-off. Try to imagine a Super Bowl that lasts for a month, played in your city between your favorite team and their archrivals. Or picture a classic Red Sox vs. Yankees game—the seventh in the World Series. Then you’ll have some concept of what it’s like to live in South America during a World Cup championship, a Mundial.

They will not only cancel church…but also school, Congress, news of world disasters, and Grandma’s birthday! A quarantine-level silence hangs over the streets, broken only by intermittent groans and cheers and the smoke of fired-up barbecues. Soccer rules the world with its own calendars and schedules.

“Soccer…is often more deeply felt than religion, and just as much a part of the community’s fabric, a repository of traditions.” –Franklin Foer, Jewish-American journalist

Whether that’s good or bad depends on your perspective. Institutional corruption pervades the soccer ecosystem like a cancer; Franklin Foer describes it as a gangsters’ paradise. Stadium violence erupts like an unbeatable pandemic (heard of the hooligans?) Salaries are too high, morals too low. Maybe the games are rigged? Excess cash leads to player lifestyles choked with luxuries, along with booze, drugs, adultery…and surely the mounting psychological pressure to perform.

It levels the playing field.

And where soccer rules the world of fans, they too fill their emptiness with the bread and circuses of modern times. A placebo to placate the pain of the populace, cheap entertainment tossed like crumbs into the hole in which many countries exist. For the elite, soccer provides nationalistic prestige, for the middle classes a pleasurable hobby, and for the masses of the slums…the elixir of life, the solitary purpose, the only joy in a life often without meaning or transcendence.

As my daughter once said, “What else do they live for? They don’t read. So they eat, drink, and watch soccer.” Not just in Chile, but everywhere.

“Football (soccer) is the ballet of the masses.” –Dmitri Shostakovich, Soviet composer/pianist

On the other hand, consider the positive impact soccer exerts on the average Pepe Pérez and Juan Jaque in small-town Chile (or Colombia or the Ivory Coast or the Czech Republic):

“…He is born in a straw crib in a tin-roofed shack and he enters the world clinging to a ball.” –Eduardo Galeano, Uruguayan journalist

It brings us under one banner.

“Soccer is an art more central to our culture than anything the Arts Council deigns to recognize.” –Germaine Greer, Australian feminist

In Chile, the soccer world broadens to include people you probably know personally. One of the young men in our church gave up his career with a local professional team to focus on his marriage. Another friend left soccer to enter the ministry. Yet another friend taught a national team player in Sunday school.

In The Quarantine Tales, a storytelling competition we’ve followed on this blog, J. M. Serrano, 10-year-old son of a star futbolista, snatches up a soccer ball from the bag of prompts and describes the Midnight Sun Championship in his hometown.

The innovation of a young teacher at the unique school he attends in Patagonia, the “Twelve Days of Tournament” take place at night, after work hours, during the Christmas holidays around the summer solstice. And it’s open to everyone, in mixed teams: women, children, seniors. Quite the community event.

J. M.’s team not only wins, but in the words of the Chilean proverb, “lo pasan chancho”—they live like pigs. Meaning not (necessarily) rolling in the mud or stuffing themselves, but just having a fantastic time!

Our friends here used to ask each other that about my blond husband. The joking response was, “No, but I know his negative.”

And we certainly know the heirs to the Brazilian soccer player’s hard work, perseverance, and joie de vivre. Soccer rules the world…mostly because it’s fun!