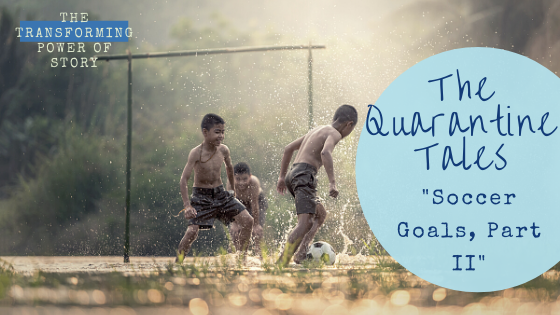 Don’t laugh because this unathletic writer has found more to say about soccer. The fútbol theme makes its cameo appearance in so many of my stories. I just noted it’s on page 18 of my very first book, Destiny at Dolphin Bay, which isn’t remotely about sports. So I didn’t plan that. Soccer just pops up in tales as it does in the game of life. How does that happen?

Sometimes soccer enters the story by way of a community club, a school recess, or a backyard pichanga (pick-up game). And sometimes soccer reigns more central and supreme, as in the national selección of Swan Island Secrets or the realm of professional teams in Winds of Andalucía.

“Life is like a game of soccer. You need goals. If there are no goals in your life then you can’t win.” –Unknown

What’s the big deal about soccer? How does soccer win in the game of life? In last week’s Quarantine Tales, 10-year-old J. M. Serrano tells about the “Twelve Days of Tournament” in his Patagonian hometown. Then he outlines Coach Olivares’ goals for utilizing a soccer championship to up the game of life for the local small peanuts.

You need goals, on the field and off. For starters, soccer raises morale.

In Chile, even the president watches when the national team plays in the World Cup. I will never forget the scene of President Piñera and his wife, Cecilia, cheering a match against Switzerland from a post-earthquake refugee center in 2010. Was it staged PR? Undoubtedly, but it helped. In the down-and-out of the rough-and-tumble game of life that year, it felt like the country’s leaders were on our side.

Soccer saved the day. Chile’s brilliant comeback that year (after a 12-year absence from the Cup) renewed the nation’s optimism after the death and disaster of February 27 and fueled September’s Bicentennial celebration. Then the mining accident happened…and confidence rose so high that we thought we could rescue 33 miners from beneath the earth.

Amazing what winning the game of life can inspire.

“In soccer, ability is much more important than shape, and in many cases, skill is the art of turning limitations into virtues.” –Eduardo Galeano, Uruguayan journalist

And ignores politics. And economics.

And even race. Sometimes. I won’t address the current situation in some countries (which is a national shame), but thankfully color and ethnicity tend to disappear in soccer as in basketball…if not always in the game of life.

Recruitment and immigration have produced robust black French- and Dutchmen, for example, though it hasn’t resulted in financial interdependence nor, I fear, in greater compassion. Despite the upsurge of support for struggling African teams such as, say, “upstart” Cameroon when they outplayed Argentina in 1990.

Or despite the reemergence of former Iron Curtain countries into the mainstream of the game. I remember how the Eastern Europeans surfaced from their 50-year hiatus at the 1994 USA World Cup. And how surprised we were to discover they’d played soccer all along and got pretty good at it! But they remain underdogs, like the Africans.

“A World Cup is the sort of common project that otherwise barely exists in modern societies.” –Simon Kuper, British author

Between lunatic fans, gangster owners, and persistent corruption, a lot of bumps and barricades linger. But still, soccer is everybody’s sport. It lends hope to Africa and the Middle East. (It also provides a stage of sorts for diehard communist and/or extremist regimes, unfortunately.)

Moving on from the game at a national and international level, community soccer waves a rallying flag for many social projects and activities. As we saw in J. M.’s Midnight Sun Championship, soccer can bypass age, gender, and socio-economic status to include everyone. At his school for underprivileged children, the students become absorbed in something challenging—and thrilling—possibly for the first time in their lives.

“I thought, if we could just come together as a community, even if that just meant playing soccer together, that could be the beginning of something good. Coming together as a community, as a people, creates more power than exists when individuals are fighting each other for scraps. Soccer has always brought people together. Soccer was where I would begin.” –Kennedy Odede, Kenyan social entrepreneur

Soccer wins at the game of life when it unites people of a community in friendly rivalries, amid and despite local dinginess. In small towns and cities, teams of “old boys” validate and cheer the seniors (and alleviate the mid-life crises). And teams of younger kids help them avoid gangs and drugs and boost self-esteem and enthusiasm for everything.

During our years in a close-knit Linares subdivision, all the neighborhood kids (8-14 years old of both sexes) watched a Japanese soccer cartoon daily…and then went out to model the show in the park across the street. And they played with a PASSION that would have put my high school team to shame. My oldest daughter lived to compete as Oliver!

While I don’t condone the kind of sports idolatry in which soccer becomes a substitute religion, or even a god, it can often form a point of departure for much spiritual outreach to kids and teens in camps, clubs, and church youth groups. Not only in Chile but around the world.

About life and tons of important life skills.

“There are a lot things that soccer does in the communities that transcend the soccer field.” –Brandi Chastain, American soccer player

“Everything I know about morality and the obligations of men, I owe it to football (soccer).” –Albert Camus, French-Algerian philosopher

“To me, soccer is so much more than a ball and two goals, it connects people from all of the corners of the world.” –Unknown

I’ve already shared how Chile’s “Golden Generation” of soccer players motivated the entire nation. Beyond that, soccer represents modern globalization in a certain sense. Rather than the clash of civilizations you might expect, the cultural mix of players imported for professional teams from anywhere results in Super Spectacles.

In those tournaments, historical frontiers and national identities become irrelevant. It’s all about the game. When the tough defensive lines of Europe meet the freewheeling flair of South America, dynamite explodes. Soccer creates a catalyst for understanding and valuing the best from all cultures.

Perhaps not every writer or speaker quoted in today’s post (and last week’s) is worth emulating in every area of their lives. But I’ve cited them to emphasize my point: People from around the world connect with and through soccer.

“Success is no accident. It is hard work, perseverance, learning, studying. Sacrifice, and most of all, love of what you are doing or learning to do.” –Pelé, Brazilian footballer

“Don’t you know…that only one receives the prize?” asks the Apostle Paul. “So…compete to win.” (I Cor. 9:24, my paraphrase). Soccer preaches the profit of discipline, persistence, and steady progress in the game.

“I am not a perfectionist, but I like to feel that things are done well. More important than that, I feel an endless need to learn, to improve, to evolve, not only to please the coach and the fans but to feel satisfied with myself. It is my conviction that there are no limits to learning, and that it can never stop, no matter what our age.”–Cristiano Ronaldo, Portuguese soccer player

Soccer can profit us, and soccer rules the world, maybe, but not forever. “Discipline yourself for the purpose of godliness; for bodily (exercise) is only of little profit, but godliness is profitable for all things, since it holds promise for the present life and also for the life to come” (I Tim. 4:7-8)…when our Savior, the Lord Jesus Christ, not soccer, will win and rule the world. That’s why “I write for the King” (Ps. 45:1).

But isn’t it exciting? Playoffs for the 2022 World Cup begin next month. Let the global “game of life” begin!