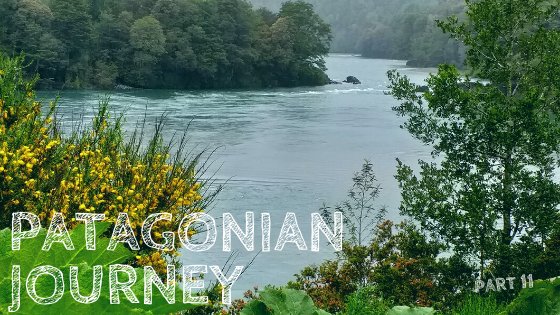 From here on, I’m completely in search of a story. As we drive over a daunting mountain pass from Queulat National Park to the seaside village of Puerto Cisnes, I lay aside my role as a tourist in the magnificent Chilean Patagonia…and become the writer bent on research.

I drag my notebook out of my backpack and go over the questions I’ve jotted down for myself. These will sharpen my observations and aid me in fine-tuning details when I do another draft of the three-book series Swan Island Secrets.

“I’ll tell you a secret. Old storytellers never die. They disappear into their own stories.” –Vera Nazarian

So I set off to spend the rest of the day doing my homework.

What’s the road like? is one of my first questions. The maps show 84 km between Puyuhuapi, where we spent last night, and the town of Puerto Cisnes. Travel time should amount to less than an hour by normal standards, especially since we’re now starting out partway along the road. But if you’ve followed this saga, you realize nothing’s “normal” about this road.

So I calculate it will take 2-3 hours for a one-way trip, over a moderately high pass and roads sloppy enough to make a Maine lumber truck shudder. At least we don’t encounter another tractor-trailer mired in a curve this time.

For the record, though, I note the obligatory use of tire chains in the winter. This isn’t a Sunday afternoon pleasure drive, by any means. Yet…after the fourth time we do this same pass, it doesn’t seem so bad. Seriously. So, in search of a story, there is that.

On the other side of the mountain, the road from the Southern Highway into Puerto Cisnes sheers by towering cliffs on the right and winds along the Cisnes River to the left. Toward the coast, the landscape flattens out. And the pavement’s excellent—feels like we’re sailing along!

And the town? It reminds me of the port of Achao on Quinchao Island, Chiloé. Why? I think it’s the endless stretch of dreary beach, the lonely screech of gulls, the constant drum and drench of rain. The sense of isolation in an otherwise busy town.

In search of a story, I’m not far off. After the character Coni Belmar grew up in this bleak setting, she hardly wants to visit here let alone stay for the long haul. But she falls in love with the mysterious fogs and swirling mists of the place…and inexplicably, I do too.

Yet Puerto Cisnes isn’t totally what I expected. It’s moderate-sized, bigger than a mere village, and many of its streets are paved, if pocked with potholes. And I’ve forgotten what “maritime climate” means in southern Chile—rain, rain, and for variety, rain. Thirteen months a year. Only the milder temperatures distinguish this from a winter day.

What’s the general atmosphere? At a glance, nothing about the town stands out. Its economy depends, apparently, on fishing and tourism, and while the infrastructure of restaurants and rental cabins far exceeds what my book portrays, everything’s pretty modest. Nothing I’d describe as elegant. In fact, the air feels steamy and ripe with damp wood. Rain beads every surface.

And I can’t make out Magdalena Island, my real-life Swan Island. Obviously it’s a lot farther across Puyuhuapi Channel than I realized. What that implies for my story, I don’t yet know.

“The world is a book, and those who do not travel read only one page.” –St. Augustine

We drive around, getting a feel for the layout, and follow a street out the south end of town. After passing a fleet of artisanal fishing craft, we discover a smooth public beach, which a sign designates as apt for bathing though I can hardly imagine it gets much use in this climate! (Maybe two weeks at the end of January ?.)

Next, we happen upon the local cemetery—a total surprise. Not only is it beyond walking distance from the main church—another departure from my story details—it’s one of the cheeriest places I’ve ever seen. Mapped out in squares of black wrought-iron or white picket fences and blitzed with flowers, the sparkling garden colors brighten the whole drab town.

We’re feeling the lunch-time crunch so start hunting for a spot to eat. It morphs into a treasure hunt as several promising places are still closed this early in the season. Finally, in frustration, we settle on a restaurant/hostel on the Costanera, the waterfront street.

Turns out this is a poor choice, as we are underserved and overcharged for what we get—a tough steak for me and a clay bowl of white worms for my husband. Just kidding, they are really tiny boneless fish in a Parmesan sauce called puyes al pilpil. He valiantly chugs them down, but I only manage one. And yes, it’s the off-putting looks more than anything.

However, the place is charmingly decorated. A trio of wildlife sketches and a pair of huemul antlers hang near the front desk, a Christmas tree brushes behind my chair. Our table offers a priceless view too, and over the meal we discuss…

How much of Magdalena Island can you see from here? As I’ve already mentioned, a thick curtain of fog blocks the distant horizon. We have no way of knowing whether it’s permanent or just the miserable day. All but twisting my eyes in search of a story, I detect a slightly darker outline, a shadow in the mist. It’s almost visible, but not quite. An optical illusion, a mirage…is it or isn’t it? Second and third glances don’t help.

My husband thinks if we had more time we could travel across in an outboard-powered Zodiac or a fishing launch. I notice signs advertising dolphin-sightseeing tours around Magdalena, so it must be feasible. Unfortunately for me, today it remains hidden in the realm between fantasy and reality.

“It’s okay to visit in search of a story,” my husband says. “But you wouldn’t want to live here long-term.”

I start to object, But I love these rainy micro-worlds like Chiloé and Patagonia. Perhaps because in a country of searing deserts and dappled vineyards, the daily drizzle here reminds me of the winter-white skies of Nova Scotia and Maine, where I grew up. It’s a whisper of long-forgotten memory.

But he’s right. I love the sun too much. Even Coquimbo, my current home, irks me with its fickle mix—the cloud cover most mornings, the sun’s unpredictable appearance, the rare hours of warmth and even rarer drops of rain.

Though perhaps, like Coni, in the end it’s home…whatever the weather. Tropical heat means only a vacation to me.

“You can find magic wherever you look. Sit back and relax, all you need is a book.” –Dr. Seuss

And the greatest marvel of a story is…we do get to experience it all. Between the pages of a book, you can linger in the fog, taste and smell the salt, and wander the wilderness trails. You can savor the dull thrum of rain on Puerto Cisnes’ desolate beach and those moments on the misty mountains of Queulat. The mystique of a tale well-told.

Then when it’s finished, you close the door on other places and times. And cozy up to your own fireside.