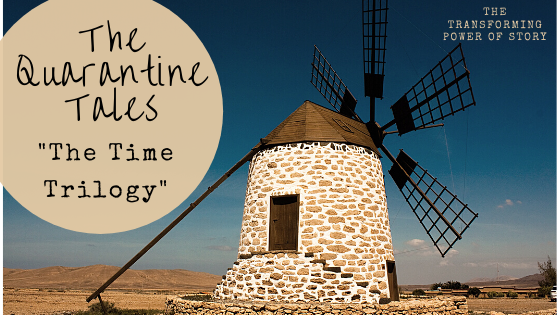 I love mysteries, especially historical mysteries. I also love history, which is why you’ll find the mysterious past woven into many of my books. One mystery of history, however, is how easily we forget both the good and the bad.

“Those who fail to learn from history are doomed to repeat it.” –Winston S. Churchill

It’s interesting that God’s people in the Bible constantly recounted the story of God’s loving care and miraculous intervention in their national history. They set up memorials, celebrated special events, and told their children the tales. “Lest we forget…”

As we are daily reminded, this moment in time, this year, will perhaps mark a critical watershed in life as we know it. The true mystery of history is, however, that we’ve ALWAYS teetered on the brink of cataclysmic calamity or change.

Strangely, it’s a story about living out stories. The plot revolves around the adventures of a nobleman who reads so many romantic tales of past chivalry that he goes wacko and decides to become a knight-errant. He loses his grip on the real world and spends his life reenacting old stories and “tilting at windmills”—imaginary enemies.

But the point of learning from history is NOT to repeat it. Stories—and history—shape our lives in significant ways, but we aren’t bound to embody them. Rather, solving the mystery of history can clear our vision and pave the way to a different future.

“Our history is not our destiny.” –Alan Cohen

The Quarantine Tales are basically a story about stories too. A family group of young people gathered on the Chilean coast hold a nightly storytelling round-robin. Little do they consider that, as for all of us during this pandemic year, history’s in the making every day.

“History never looks like history when you are living through it.” –John William Gardner

Keli Peterson, the collector of stories, titles today’s triple feature The Time Trilogy History Mysteries. Not that the three stories tell “time travel” tales exactly, but they all showcase some aspect of Chilean history.

Sometimes, we not only don’t learn the lessons of our history too well, we suffer from collective amnesia when it comes to distinguishing the good guys from the bad guys. Ingratitude toward the heroes plagues us. Reimagination of the villains has clearly deceived us on occasion. Just a bit of balance would go a long way, no? Nobody’s perfect—either perfectly horrible or perfectly wonderful.

The other 10-year-old Serrano twin, Ricardo, wishes his story prompt, a wooden coffer of “gold” coins, were as real as his yarn about “Pirate Treasure on Horseshoe Beach.”

One of the first, Sir Francis Drake on his voyage around the world, is said to have raided a rich cargo from the harbor of Valparaíso in 1578. On the run, he found refuge in Coquimbo’s Guayacán and Horseshoe Bays, which he made a safe haven for the “brotherhood” of fellow corsairs from their mutual enemy, the Viceroy of Peru. Legend has it Drake offloaded his treasure near Horseshoe’s calm waters—within walking distance of our home today.

Naturally, the tale generated countless rumors of treasure buried on the islands and coasts of Chile. People have searched for generations, but “not all that glitters is gold,” as Ricky reminds his cousins with a grin. “I’m going to check out the caves at the old Fort Lambert end of the port next.”

Bartholomew Sharp sacked Coquimbo in 1680 when “ransom” money from the inhabitants failed to materialize. The people pronounced his name “Charqui,” and his terrifying stop in the city gave rise to the saying, “Llegó Charqui a Coquimbo.” To this day, “Charqui arrived at Coquimbo” indicates an unexpected and unwanted visitor.

However, in the mystery of history, the raids and ravages of buccaneers soon evolved into romantic tall tales. Coquimbo’s soccer team is now called—what else?—the Pirates. Just as, during the extension of Spain’s colonial empire, the wars with the Araucanians involved horrific atrocities. On both sides. (Sounds so familiar, doesn’t it?) And today all but myth…none of it feels real.

“Knowing your history can give you the tools to shape your future.” –Gloria Fekft

On the other hand, like many other countries where history gets written by the victors, they say, Chile has a regretful pattern of unkindness to the native peoples, the newcomers, and the novel thinkers. That’s not to imply that every view is or should be equally valid. But that habit of revising history around our preferred bias blinds us to much we could learn from the past and cripples us from moving toward the future.

Spain, like Chile, has traditionally whitewashed the wicked and blackened the brightest stars on her national horizon. In my most recent 2-book series, Winds of Andalucía, the character Valeria investigates the background of a mural featuring the Inquisition. Along with the great Jewish and Moorish civilizations, sixteenth-century authorities hastily snuffed out the fledging Protestant Reformation in Spain.

Which meant that the light of the gospel, the progress of industry, and the education of the Enlightenment all remained barred from Spain’s colonies too. Legacy of the Linnebrink Light tells about what the first missionaries suffered to bring the Word of Christ to the darkest islands of Chiloé. Just a flickering candle at first, then a blazing beacon. In the mystery of history, decades—even centuries for some—would pass before their contributions were acknowledged.

Rise of the Republic

In Chile’s 1810 bid for independence from Spain, the level of treachery would scare the hardiest soldier. Isolated Chiloé Island, outside the pale at the best of times, hung on as Spain’s final bastion of empire in South America until 1826—and then almost refused to join the Republic. First Mate’s Log describes lessons learned from the patriots, applied to a modern-day insurrection. Beware, me maties, there be pirates here.

“The more you know about the past, the better prepared you are for the future.” –Theodore Roosevelt

So, unfortunately, Chile was ill prepared for the dawn of democracy and little interested in the continental union proposed by Simón Bolívar. The new South American nations soon became embroiled in frequent disputes over the region’s rich resources. Chile leaped into the thick of the fray, lured by nitrates in the northern desert–followed by coal and eventually the biggest hidden treasure of all: COPPER, red gold.

Using a mineral sampler as his story springboard, Esteban Jarpa’s Quarantine Tale entry tells how he and a friend hitchhiked to the Humberstone saltpeter (nitrate) works in the Atacama and got “Lost in a Ghost Town.” The eerie experience reminded him of a steampunk novel as he wandered among once-elegant Victorian buildings, dusty huts, and rusty machinery, in blistering heat and stinging wind.

From the oppressive life of a mining camp, the iconic character of the tough Chilean miner was born. Forced by the nitrate barons to work long hours in harsh and hazardous conditions, paid in “tokens” redeemable only at the company store, the men turned to the wild life and vices of any boom town. The Chilean expression, “andar de carrete,” loosely means “to have a night on the town.” But I picture those miners clinging to a cart (carrete) with their fingernails.

Moving on to the recent past century, Esteban’s younger sister, Emilia, choses a white silk scarf and slippers and spins a takeoff on a Chilean legend, “The English Quarter Blonde.” Instead of the original story’s setting along Kennedy Avenue in Santiago, Emilia places the panicked party girl wringing her hands in the English Quarter, a quaint neighborhood of downtown Coquimbo.

“A people without the knowledge of their past history, origin and culture is like a tree without roots.” –Marcus Garvey

The English Quarter forms part of the city’s cultural and historical heritage. During the tourist season, guides in period costume offer a tour of the 19th- and early 20th-century British architecture called the Route of the English Carpenter. (Another instance where old enemies turned into admired friends.) At night, the English Quarter springs into a hotspot for summer social life. Perfect for a lovely phantom, lost among the sea captains’ mansions, pathetically looking for help.

Emilia’s quick to assure the others she doesn’t believe a word of the ghost story she has fun weaving. “Mucho ruido, pocas nueces,” she says. All fluff, no substance. Much ado about nothing, a lot of hot air and noise. But the story of the beautiful blonde dressed in white, pleading for a ride and then disappearing, was reported and repeated too many times during the 1980’s not to beg an imaginative explanation.

Who—or what—was she running from? Where was she headed? And why and how did she vanish from the car? Sounds like a good goosepimpler to me. The Kennedy Avenue Blonde is definitely on my TBW List—to be written.

Along with Angélica De la Cruz’s true stories of some of the origins of Chilote mythology. Even the strangest legends find their roots in real life. The mystery of history: There’s a story behind everything.

You can draw facts from fiction, of course. But you’ll remember the feelings evoked by fantasy. That’s why I love the mystery of history. Connect the dry datelines with living, breathing friends in the pages of a book—and you’ll never forget.

“A small body of determined spirits fired by an unquenchable faith in their mission can alter the course of history.” –Mahatma Gandhi

In The Seagull Operation (First Mate’s Log 2), the character Melissa remarks to her brother-in-law, “The trouble with you guys is you’re too busy making history to appreciate it.” Perhaps too busy living life to scrutinize it closely.

And usually we’re too occupied editing the short chapters of our lives to pay attention to God’s epic story. His story has an overarching plot, a riveting climax, and dramatic high stakes.

Of course, we all want to play the main character, especially in our own point of view, but that role belongs to God. He is the hero of all stories, as He is the author of history, the creator of mystery, and the great transformer of outcomes. He knows the end from the beginning, and the twists never take Him by surprise.

Is God involved in the history of this nation? Of your nation? Surely. He invites us to take our part, though. Can we alter history? That’s a mystery I absolutely believe in.