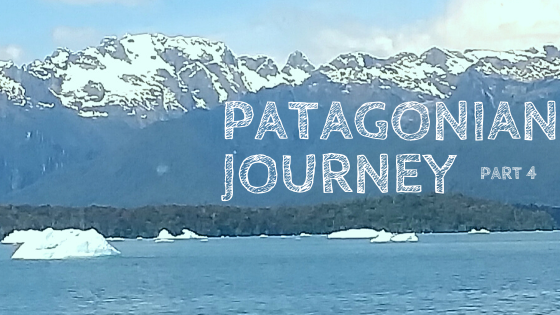 Today we’re on our way to a frigid South Pacific blue lagoon, renowned for its millennial glacier flanked by towering mountain peaks. After looking forward to this moment for 35 years, I suspect the trip’s not off to an auspicious start.

“Never lose an opportunity of seeing anything beautiful, for beauty is God’s handwriting.” –Ralph Waldo Emerson

After crippling a toe and then tripping over a wire to the ground yesterday, I respond gingerly to the 5:30 a.m. alarm. I’m reluctant to move, as well as afraid of disappointment, especially after the hype, the huge mental build-up to…

But it’s already light, albeit gray and cloudy, in the Southern Hemisphere summer. As we pad along to breakfast at the hotel restaurant, we find the lobby jammed with tourists from outside who are signing up for the tour and renting a rainbow of ski jackets.

Soon we’re mingling with the crowd in line for a transfer van to the port area. There we load onto a catamaran called Chaitén for the day cruise to Laguna San Rafael in Chile’s northern Patagonia. The cat glides out of Chacabuco harbor on schedule at 8 a.m. Finally en route to the blue lagoon.

We locate window seats on the starboard side of the lower deck and settle in for breakfast service (yes, second breakfast for us). It’s kind of like being on a plane—we’re stuck in our seats while the crew serves, and the food is mediocre. Not to say the hot ham-and-cheese is unwelcome. Munching gives us something to do while we gawk out the windows.

We might as well sit back and enjoy the passing land- and seascapes, anyway. The voyage will take about five hours at an average speed of 24 knots, the captain informs. My eyes never tire of the view as we cruise down the fiord. Think Norway, Alaska, Iceland.

And just as we finish breakfast, we glimpse a much larger ship steaming up the fiord toward us. It passes by on our port side, and my husband and I nearly leap out of our seats when we recognize it as the same cruise ship we sailed to Canada on several years ago. A familiar sight amid the fabulous scenery surrounding us. Who would’ve thought?

After that, our guides, Pablo and Tamara (from yesterday), give an orientation talk in the upper-deck lounge. We learn that the San Rafael Glacier is part of what is known as the Northern Ice Field, which originates at Volcán San Valentín. (That’s what I say, a lot of “saints” around here.)

Among the 90 active volcanoes in the Chilean Andes, five or six pepper the Region of Aysén, with names like Hudson, Macú, and Mentolat. The mention of Mentolat snags my attention. It’s located in the center of Magdalena Island, the protype for “Swan Island” in my Swan trilogy. This is, in part, why I’m here.

We don’t stay in the lounge long, though, because the place affords standing room only, and not much of that. A lot of people, including an entire tour group of Israelis, came up to the bar right after breakfast. Now they’re packed into the couches, nursing pisco sours.

I take a stroll on deck, if you can call it that in such a small square of space in the stern. The skies remain overcast as we ease by two islands marking the halfway point of the voyage: Raimapu, meaning land of flowers, and Tres Cruces, three crosses. Across from the islands is the Quitralco Estuary, named fire water, because of the hot springs at the far end of it. More evergreen alpine woods behind ever-blue seas.

I picture this voyage as somewhat like my character Coni Belmar’s class trip, ferrying along the desolate west coast of “Swan Island” in Swan Song. The blue lagoon of San Rafael is the honeymoon and anniversary destination of several other characters. For so long, this has loomed as THE place to travel to, and now…I wonder.

It’s cool even in my black suede Canadian parka, designed for extreme temps. Wind lashes my face with my hair. So I wander back inside.

This cruise hasn’t turned out like I expected, in many ways. Of course, the Chaitén is so much smaller than a true ocean-going vessel. There’s a shortage of space, for my taste—not enough seating, not enough deck. And there’s no real buffet, just a continuous open bar.

The weather’s not cooperating either, it seems. But on the other hand, it’s still a stunning dream come true. I’m not complaining at all, just expressing the sometimes-hard lesson that half the joy is found in the anticipation.

Before noon, we’re served an early lunch—a late breakfast for Chileans. But the crew needs to get this out of the way because we’re nearing the passage into the lagoon. We dine on chicken salad, salmon with white sauce, potato scallop, flan with raspberry sauce.

Not bad for “airplane” food. And clefts of vibrant blue begin to appear in the sky. Drum roll…

As the catamaran squeezes through a narrow channel into Laguna San Rafael at 1 p.m., the crew plays the national anthem. It’s fitting. This is Eden indeed, albeit a cold one.

Suddenly everything explodes in pure blue. Imperial cormorants skim the lake, now a shade of shimmering seafoam green. Icebergs, the chunks we see floating above the surface, literally glow a rich hydrangea blue. Cracks in the glacier look like streaks of indigo ink.

I have the sensation of a watershed moment. Will we now talk in terms of before and after San Rafael?

I don’t know. But from now on, I’ll always paint the Region of Aysén, famed for its old-growth temperate rainforests, in shades of blue instead of green in my memory. The San Rafael Glacier sparkles like a sapphire, not a diamond, to me.

It’s the quintessential blue lagoon. Dazzling, not disappointing at all. Like the clouds, my doubts have vanished.