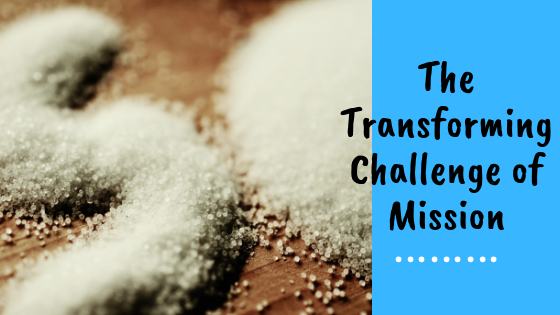 We consume so much salt in this country—too much—that you’d be surprised what the Church in Chile needs more of. And maybe you’ll be even more surprised to realize it’s what your church probably needs too. This once high-cost/high-value treasure could transform the world.

Humble crystals of SALT—that’s what we lack.

We don’t need more pastors or more missionaries or more Bible college students, although we’d welcome them. We don’t necessarily need more doctrinal teaching or better expository preaching, though that wouldn’t hurt either.

Honestly, we don’t even lack for dynamic services, fresh ideas, and active youth groups. We don’t miss a plethora of ministries for every taste or a state-of-the-art building with myriad bells and whistles.

But our churches do need more…

By that I mean, people like the believers of the early church who scattered around the globe and talked about Jesus (Acts 11:19-20), carrying their candles and their salt boxes (Mt. 5:13-14). Since Jesus had told them, “…as you are going, therefore, make disciples of all nations” (Mt. 28:19), they flavored the world and filled it with light.

During the Middle Ages, most spices including salt were a luxury reserved for the upper classes. Unless you were a member of the aristocracy, salt receptacles didn’t get set at your end of the table.

These days, since we can buy plain salt for a few coins, it’s the world’s most used seasoning. The salt has slid down the table to us ordinary folks, and good thing, because our bodies can’t manage without it. While over-salting has received some bad press in the medical field, who wants to hear they should give it up? It makes food taste better. And it gets used when and where other seasonings don’t—saffron is almost an investment, isn’t it?

How we need that kind of change in our thinking as well as eating habits. Let’s stop setting apart the Christian life for the clergy, the specially called, the heroes of the faith. We need savory (and shiny) Christians in hospitals, schools, offices, barracks, factories, and fishing boats. Though we long ago abandoned the age of hermitages and monasteries, how is it we now confine our Christianity to the Sunday morning service?

A friend recently mentioned a survey in which youth were asked about their reading preferences. It turns out, amazingly, that sword fighting, dragon riding, and time travel are overrated. Instead, they want to read books featuring realistic adventures they have a chance of actually modeling. Stories about ordinary people like themselves whose lives are transformed and whose heroism stems from steady plodding rather than superpowers.

They are noticed, both their presence and their absence. Whether they’re a quiet hint or a bold statement, they don’t hide undercover. Invisible, ordinary, but hardly undetectable …as anyone knows who’s ever mixed up their sugar and salt canisters.

Not ineffectual either. They do the job God has designed for them. Like salt, they preserve, purify, and heal as well as flavor whatever pot they land in. They demonstrate what Jesus has done for them. They show how He’s made their lives palpably, tangibly different.

Salt is a metaphor for wisdom. I think of the term “old salts” and remember how much the church needs older Christians too. Not necessarily old in age, but in maturity. Not worn-out and insipid, but full of zest for life.

Sadly, few Christians finish with a flourish. How our churches need those wise, unpretentious “salt-of-the-earth” men and women who openly let their light shine and leave a good aftertaste when they’re gone.

To gain that testimony, we need to transform from bland and passive to strong and…

In Roman times, soldiers were sometimes paid in salt, and you had to be “worth your salt” (“sal-ary”). For us, this means “a long obedience in the same direction,” as Eugene Peterson (of The Message fame) put it. What we all need is willingness to go the distance–to trust and obey Jesus when we claim to believe in Him. Those two elements must go hand-in-hand.

Like salt. While I’m no chemistry whiz, I’ve learned that NaCl is a normally stable compound. This begs the question of how it could lose its saltiness. But in Jesus’ day, most salt in Palestine wasn’t mined or extracted from sea water. Rather, it was commonly sourced from the marshes of the Dead Sea.

That salt contained so many impurities that, through exposure to sun, rain, and air, it soon effloresced. (Yeah, I had to look that up too.) Meaning…it lost moisture and turned into a fine, dry powder, “…no longer good for anything, except to be thrown out and trampled underfoot by men” (Mt. 5:13).

Basically this impure salt degraded into useless, tasteless dust. Too poor even for soil, it became street dirt instead.

What our Church in Chile needs is plain, pure, ordinary salt. I challenge us to relish life, enjoy it with gusto—and for that we disciples must wear sandals on both feet: Faith and Obedience.

In olden times, salt was also rubbed on lamp wicks to increase their brightness. A few years ago, on a trip to San Pedro in the Atacama Desert, we saw café owners shake entire kilo bags of salt into their open-earth fire pits. When we asked why, they told us the salt causes the flames to toss up beautiful rainbow sparks. Oh.